Posted on December 18, 2010 by notesdethecuartalife

I’m sitting at a laminated plywood table on a rickety plastic chair. Strip lighting has put everyone slightly off ease, except Damian. Damian is why we are all here, though he’s in fact not here yet. We each order a cortado with a mini medialuna (there’s an offer on) and wait for him. There are five of us, two middle-aged porteña ladies (pearls, cardigans and tailored trousers), my friend Vicky (eco-warrior yoga teacher) and George (a journalist from east London rocking English country chic in a tweed jacket). Then there’s me, just curious.

Small talk waning, Damian finally arrives in paint-stained dungarees and an afghan scarf, his belly falls over the sweater that he ties around his waist as he sits down. He greets each of us in turn, smiling broadly with his two chins, planting a besito on each of our cheeks.

First impressions are good. He does Diego Rivera well. I have high hopes.

Like Diego, Damian is a muralist and a revolutionist. Although Peronista rather than Communista. He lives, works and breathes Buenos Aires’ slums. He was born in one too. In the organic limits of the city, beyond the grid system of tarmac and right angles, in the villas – neighbourhoods recognised as existing “outside society,” separate from the “civilised city.” People live with a range of make-shift water and electricity supplies in homes built with whatever is at hand, corrugated iron roofs often held down by bricks and children’s toys!

Those who live within them call them barrios, those who live outside their borders call them villas, (slums). Typified by drugs, crime and violence these communities reside outside of state control, the police have little or no authority in their streets, different laws apply here.

However, several organisations have made inroads into these worlds, Evangelistas, Peronistas and a handful of NGOs. Damian works with the former two. Mixing faith, morals and politics in his pallet.

He is passionate about his work and eager to share his enthusiasm and saintly commitment to the cause. He begins to take us into his world with a story, painting in our minds the hardships that he’s encountered and the horrors that he has seen: a pre-adolescent girl giving a blow job to a man in the street in exchange for a cigarette, children giving birth to children, the destruction of addiction, glue stiffing and Paco – a lethal (and cheap) derivative of cocaine that can kill users within a year.

George and I decided to spend the following Saturday accompanying Damian on his rounds, to see this world through our own eyes.

Before entering the first villa Damian instructs us to keep our mouths shut. He is on edge as we walk down the street whilst Bolivian cumbia music blares obliviously out of every other home. Our foreignness makes us targets, we’re white as white here and without the lengua franca we’ve cause to feel fearful, but I’m too curious to let this sentiment sink in. We’ve done all we can, George has replaced his tweed for a black bomber jacket, and my camera has been quickly whisked from sight after I conspicuously started snapping at an adidas-clad mannequin perched on a roof with a spliff hanging out of its mouth.

Damian is known around these parts, we’re safe, más o menos, with him.

After a lunch of soup and church-made bread we jump on a bus to the next impoverished neighbourhood. Revolution, it seems, is hard work. From 9am-6pm we move from one make-shift church to the next, singing-along with infants in a converted shipping container, exchanging pleasantries with the bright blue-eyed priest. We play dodge-ball under a fly-over, stick, glue and colour-in pictures crouched around miniature tables in several chilly church halls and finally freeze off our fingers painting-in blocks of colour on Damian’s latest mural with an entourage of little helpers.

Damian paints with acrylics, mixing primary shades to pastel to save a few pennies (white is the cheapest colour to buy). He asks if I know why he uses acrylic paint. I have a guess. Because it’s cheap? Because it’s easy to wash out of children’s clothes? Apparently not. He uses it because it’s not toxic, so the children can’t sniff it. I can’t quite believe it. Cute little 4-7 year olds running away to get high with a pot of his paint, but well, if he says so.

We in fact don’t agree on everything. To my frustration, George and I become You, Europe, the Developed World in his discourse. He refers to our world like a paradise, a state of civilisation that Latin America is still waiting to arrive. Everywhere we go we are thanked, constantly, at every opportunity they ingratiate us for making the journey all the way from England to visit them, these poor children, like we’ve sacrificed something to arrive in front of them. It makes me cringe. The part of the world I come from is imperfect too. I’m here because I chose to be here, not because my presence will do good. I’m not a healer or a priest and I don’t share Damian’s grand idealism.

I had a great day, sharing stories with people in my broken Spanish and giggling with children who were so full of life. It was fascinating to get an insight into Damian’s work. To share a bit of his zest for the future, a future that he strives to change, but knows he is very unlikely to see. He toils for a brighter world, the transformation of villas miserias into villas felices.

I think he’s getting somewhere, sharing his skills, brightening walls, making streets smile. Creative action for a cause, empowerment through creativity; I’m a fan. I only wonder if Damian’s relations with political and evangelical movements undermine the independence of art in these poorest parts of Buenos Aires, but then the money for the paint has to come from somewhere…

For up to date info on Damian’s projects visit http://www.grupocultural-cruzdelsur.blogspot.com/ 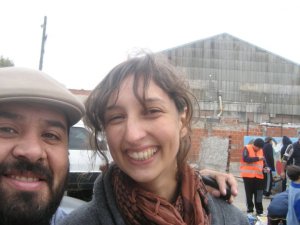 This entry was posted in Buenos A.musings. Bookmark the permalink.

2 Responses to Slumming it